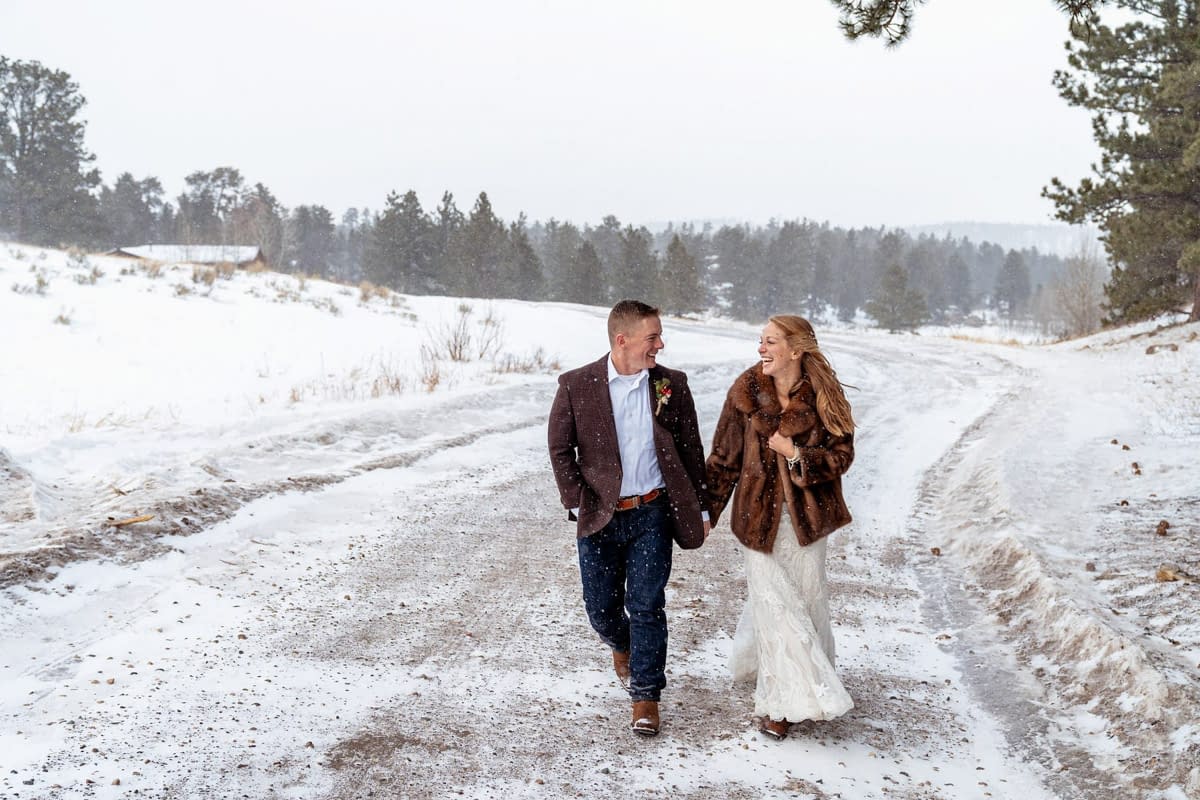 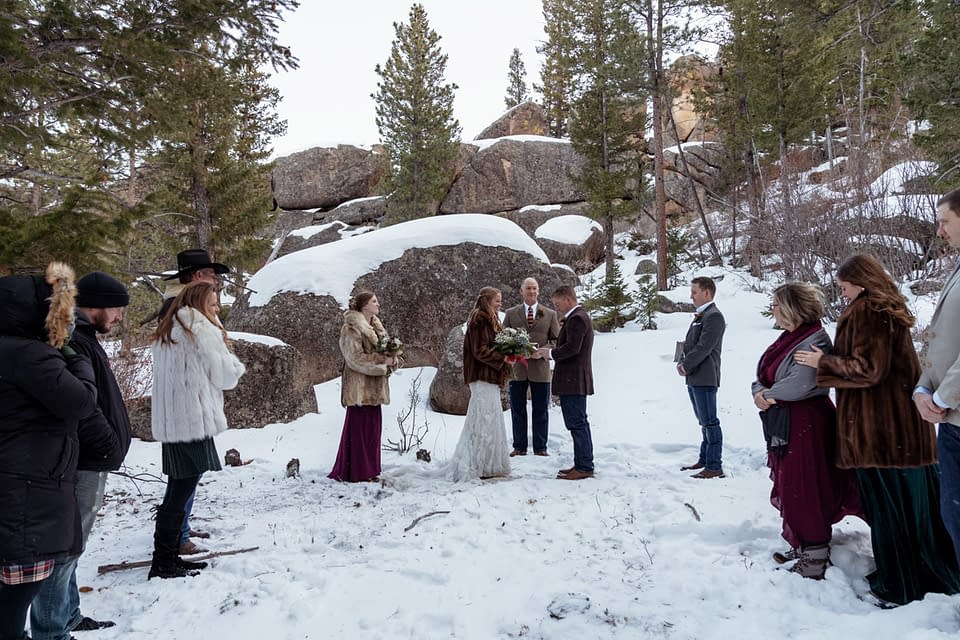 As the weeks and days passed and we got closer to 2020, my excitement and anticipation for what the new year could bring grew. 2019 had been a great year, and I was excited for the couples I would soon meet and their weddings I would soon photograph. As the year came to a close, I was gifted an early new years surprise. Brittany and Connor had chosen me to photograph their cozy intimate snow covered wedding in Colorado, which would take place on January 1st, 2020. That’s right 01/01/2020. The first day of a new year, of a new decade.

I was absolutely stoked. Then I met Brittany, and my stoke grew exponentially.

You see, Brittany and Connor have a wonderful story. It all starts with Connor and his best friend Adam, a buddy from the Marine Corps. They served together, deployed together, and as people in those situations tend to do, grew very close together. While he had his friendship situation locked down, for his whole life he mostly remained single. Though he had plenty of suitors, he turned them all away. Connor knew exactly what he wanted, and wasn’t going to waste his time on someone who wasn’t the perfect partner for him.

Adam, Connor’s best friend, was married to Anne, Brittany’s best friend. While Anne and Adam kept saying to Connor that Brittany was perfect for him, they didn’t say the same to Brittany. You see, Brittany was already married. So unfortunately, Connor would have to search elsewhere.  In fact, when they first met, they barely spoke. The little communication they ddi have left Brittany thinking that he was a bit of a prick (her words!). So, not in the cards, right?
Fast forward two years later, and Brittany was now divorced. Up until then, she hadn’t really heard much about Connor from Adam and Anne. She still thought he was a prick from her very brief interaction with him, and therefore did not think anything of it when she made plans to spend New Years with her friends, and heard that Connor was coming through. On the way to dropping his brother off at Boot Camp, Connor was invited and planned to spend New Years with Adam and Anne.

Well folks, the stars aligned. The two of them were now both single, and ready to mingle, and boy oh boy did they hit it off. And they hit it off over books. And their love of nature, of camping, of hunting. They talked endlessly and fell hard and fast for each other. It was exactly as Anne and Adam thought.

Because of Connor’s military work, their first 9 months were long distance. Despite the limited amount of time that they could spend together, something extraordinary happened. Buckle up, because we’re going to sappy town.

After Brittany’s divorce, she didn’t want to get remarried. She stopped believing in the institution. You can say, she was a little bit jaded. Then came Connor. After a month of dating, and remember this was just long distance, Connor knew that Brittany was the one. He had no reservations, no questions, and certainly no hesitation. After one month of dating, he told her he wanted to marry her. He’d wait till she was ready, but he knew she was the one for him.

Wait she did. She didn’t know if he was the one and she still wasn’t sure she even wanted to remarry. Not to mention, his unofficial declaration / proposal was hella quick. So she waited. He was patient though. Then one night, a year and a half after they first started dating, while Connor was sleeping, it just hit her. She knew. She poked Connor, woke him up, he wanted to go back to sleep, but she said you’ll want to be awake for this.

She looked at him and said you remember that idea, that plan, that question you asked me 19 months ago? I’m ready.
What?!

I’m ready to marry you.

There ya have it. Hearts melted. Beauty expanded. Happiness quota filled to the brim.

6 months later I drove along snow covered roads through Northern Colorado’s mountains, as snow fell softly all around. I arrived at a beautiful warm cabin and was greeted by wonderful and friendly folks. These 17 people were the closest of the closest people Brittany and Connor would have with them on their special day.

Connor wrote his vows and a letter to Brittany alone, while everyone else got ready. Taking time to find the right words to express his undying love for her. Upstairs, Brittany got ready with Anne, helped along by her mom. While they took some time to laugh and soak in the moment, Brittany was ready to go. She was ready to marry the man she’s always desired. 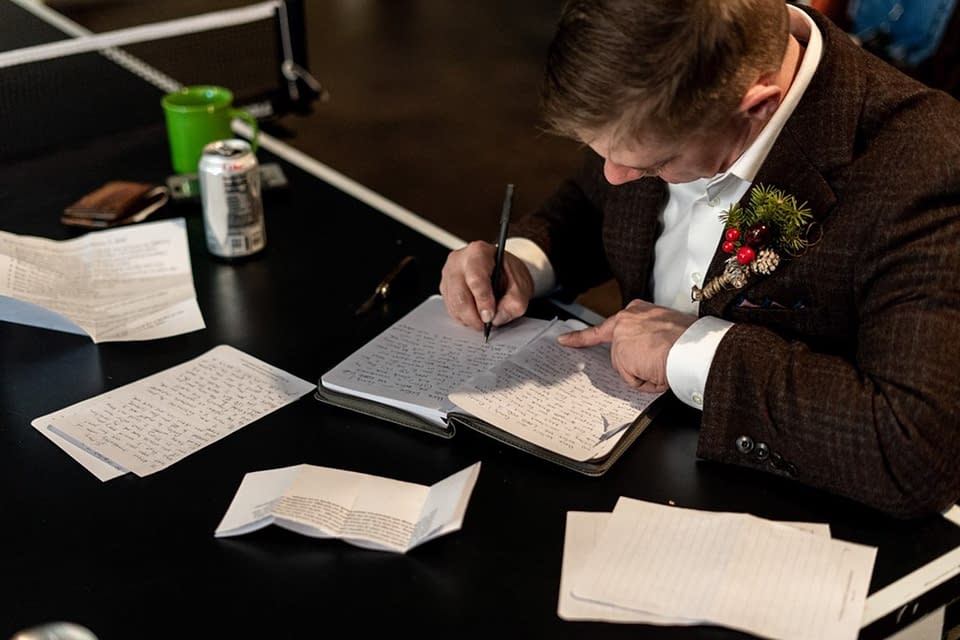 We gathered in the vestibule of the cabin, took a deep breath, didn’t even bother to contain our smiles, and stepped outside. The snow crunched beneath our feet as rays of sun poked through the gaps in the trees. In twos an threes everyone walked to the

ir spot. Because it was such an intimate wedding, everyone had a prime viewpoint of the ceremony. There were no bad seats in the house. Their friend stood on a boulder and played the violin as Brittany and her father walked out.

Everything was just absolutely beautiful. The sun would peak through the leaves, while snow gently fell, and Brittany and Connor stood before the rocks, surrounded by their closest friends and family, and it was fantastic. Her father, a true looking American cowboy, read heartfelt words about his pride and love for his daughter. His father officiated, bringing a warmth and understanding to the words that could only come from a father’s knowledge and heart.

And then they kissed, hugged, laughed and shed a couple tears. The ceremony was over and their lives together had officially begun.

We gathered everyone and took our ‘formal’ pictures. Once that was over, we shooed everyone back into the cabin, while Connor, Brittany, and I took our time having fun, capturing their love. We ambled through the snow, in between the trees, and along the roads to the cabin they were staying at.

When we got inside, three amazing fur-babies ran up to greet me, and then immediately began celebrating with their humans. We took time in the cabin to get individual shots of the pups with their humans, and then took them for a short walk outside. This family of five played in the snow and my heart was just overwhelmed with joy. After a little while, we brought the doggos back in the cabin, and made our way back to the main cabin where the party was.

Here’s the thing about intimate weddings in cabins – you get to have the exact type of fun you want. Brittany and Connor didn’t have to spend time entertaining anyone else, or performing traditions they didn’t care about. They played card games, board games, pool, and more. They had home cooked meals. They cut their cake, shared a first dance, had a father-daughter dance, and spent the evening exactly as they want. Hours of fun with the people they cared about most.
That’s what intimate weddings are all about. That’s what made Brittany and Connor’s day so unbelievably special. It was unique to who they both are. They weren’t pressed for time. They weren’t rushed from event to event. They got to savor every minute of it. Create memories that will last a lifetime.
Brittany and Connor are gems of human beings, and I’m so grateful to have had the opportunity to capture their magical day.

Meet the Best Colorado Elopement Photographer for You

Hi there! I’m Adam, and my favorite thing in the world is helping couples just like you plan their perfect elopement. Whatever your ideal day looks like, I’m here to help you make it happen. If you’re ready to start planning or just have some questions to decide which Colorado elopement package is right for you, I’d love to hear from you.

Want to see more? Check out how our couples adventure for their elopements on Instagram!

Want to See how my Amores Adventure for their elopement?